Powelton Village is on the northern side of University City.  It has a mix of small apartment buildings and twin homes and Lancaster Avenue goes through the middle of the neighborhood.  The Route 10 trolley runs through the neighborhood up 36th Street and turns west onto Lancaster Avenue, making 36th and Lancaster a very important, if underdeveloped, intersection in University City.  A block of small buildings along the 3600 block of Lancaster Avenue is known as Lancaster Mews and was renovated some thirty years ago. That block had a row of stores and some space above for apartments and offices, with traditional trim and wooden bay windows.  Lancaster Mews has been bought by Domus Construction and renovated again, but also has been expanded with more apartments and new retail. This new version of the block is being called The Link University City and has been designed by JKRP Architects. The original buildings were largely saved and renovated, but a new four-story addition was built in back and a five-story addition was built on a former parking lot along 36th Street.  The original retail spaces all along Lancaster Avenue were saved and will have new businesses in them.

The Link University City has 126 rental units targeted for students, and it has 251 beds.  The apartments are mostly one and two bedroom units, with a couple available studios. The units are furnished, with a coffee table, couch, entertainment stand, and wall-mounted 50-inch TV in the living rooms and a bed and a desk with chair in the bedrooms.  The kitchens have islands, bar stools, quartz countertops, deep Sterling sinks, sink garbage disposals, large corner cabinets, and Whirlpool gas ranges; refrigerators; microwaves; and dishwashers (all stainless steel). The bathrooms have tile showers, rain shower heads, and quartz vanities.  Each unit has Whirlpool washers and dryers and all master bedrooms have large walk-in closets. The building has a bi-level fitness center with exercise bikes, a business center with conference rooms and Apple Macs with printers, and a top floor sky lounge with games; a kitchen; TVs; and events for the residents.  Each floor has a study lounge. There are, also, bicycle storage areas, a package room, a mailroom, and a lobby lounge with a breakfast bar.

This area of University City is seeing much new development.  Just south of The Link University City, a new elementary school is being built and to the south of that school, Drexel University is building a new academic tower.  On the 3700 block of Lancaster Avenue, another new apartment building is about to be built and to the south of there, a new office tower is being built. This is just a few years after new office and apartment towers were built on Market Street and a new student apartment building was built at 34th and Lancaster.  The Link University City joins a large mix of new development connecting UCity Square to Powelton Village and bringing new housing, jobs, retail, and academic space to this area of University City. 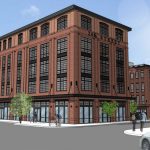 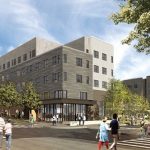