The former Pyramid Electric Supply Building, at 3101 Glenwood Avenue in Brewerytown, is being renovated by MMPartners into an upscale loft-style apartment building.  The Pyramid Electric Supply Building was originally built as a warehouse for Harry C. Kahn and Son, who made furniture.  It was used by Kahn and Son until 1961, then was occupied by Pyramid Electric Supply until 2000 and had been vacant ever since.  MMPartners bought the building from Westrum Development, which has been developing much of 31st Street in Brewerytown over the years.  The building is at the intersection of 31st Street, Glenwood Avenue, and Oxford Street.  It is triangular-shaped and very visible from the regional rail train to Trenton, which runs next to the building.

The Pyramid Lofts has 50 upscale rental apartments.  It has 24 studios, 12 one-bedrooms, and 14 two-bedroom units.  The units have quartz countertops, enamel tubs, and Whirlpool kitchen appliances and washers and dryers.  Each unit has large new windows mimicking the industrial windows of the original warehouse and has amazing views of the skylines of Center City, University City, North Philadelphia, and Fairmount Park.  Many units, and common areas, still have decorative graffiti art, which was created when the building was vacant and has been left on some of the walls by MMP’s Curated Art Program.  Among the building’s new amenities are a fitness center, a dog run, a package concierge, bicycle storage, and 31 parking spaces.  Current availability is for studios, starting at $995 and two-bedroom units, starting at $1,625.  All the one-bedroom units are currently rented.

Pyramid Lofts joins Westrum’s many developments along 31st Street and Eastern Lofts on Glenwood Avenue.  These developments in a once entirely vacant former industrial corridor next to Fairmount Park are becoming a destination for Brewerytown and North Philadelphia. 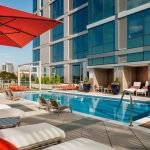 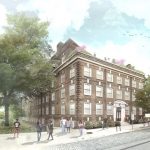 Long Vacant Germantown YWCA Building to be Renovated into Apartments