Schuylkill Yards is the very large redevelopment of the blocks around 30th Street Station in University City.  The redevelopment plan, created by Brandywine Realty and Drexel University, is intended to build millions of square feet of office, research, residential, and retail space in a new neighborhood and business district surrounding the train station.  Brandywine has already built a new park, replacing a former parking lot, called Drexel Square and they are renovating the former Bulletin newspaper building into a new office building, with Spark Therapeutics as the anchor tenant. Brandywine is now planning to start building the first new construction of Schuylkill Yards, two highrise towers along JFK Boulevard, west of 30th Street Station.  These new towers are at 3001 JFK Boulevard and 3025 JFK Boulevard, and are being referred to as the East Tower and West Tower, respectively. These new towers, and a public plaza in between them, are being designed by PAU Studio, HDR, SWA/Balsley, and Pennoni Engineering.

The East Tower will rise 34 stories and 512 feet.  It will be comprised of three distinct sections, which will not be contiguous as it rises.  The bottom and top sections will cantilever at angles, making the view of the building different from various locations.  The cantilevers allow for green space terraces and affect light and the direction of the wind. The tower will have 930,000 square feet of prime office space and 6,600 square feet of ground level retail space.  There will be an amenity space for building employees at the 14th floor. The East Tower will have 125 parking spaces underground and 131 bicycle parking spaces. The exterior of the building will have red metal trim.  The rectangular windows are meant to resemble the windows on Pennsylvania railroad cars. The base will have terra cotta, meant to resemble the terra cotta exterior of the Fisher Fine Arts Library on the campus of the University of Pennsylvania nearby, and a retail arcade framed by a colonnade with arches and fins.  The East Tower will be a LEED Silver-certified sustainable building.

The West Tower will be 28 stories, and 362 feet, tall.  It will be a mix of residential, office, and retail space.  The West Tower will have 326 rental apartment units, 200,000 square feet of loft-style office space for smaller, likely high-tech companies, and 9,600 square feet of retail.  That tower will be a Well Fit-certified building, which provides a healthier living and working environment for residents and workers. The exterior will have gray and brown panels.  The two towers will be connected by a one-acre plaza imbetween them. That plaza will be underneath the rail high line that runs over JFK Boulevard and is tentatively being called High Line Plaza.  High Line Plaza will have paving that resembles the rail lines of the neighboring railyard, a trellis beneath the high line, and a raised overlook in the back that will allow views of the plaza and Drexel Square.  The raised overlook could serve as a stage for concerts and events, and the High Line Plaza will be used for other public events and will have benches and outdoor seating for adjacent eateries. The retail walls along the plaza will be angled to make the High Line Plaza a diagonal that would correspond to a future “College Walk” between JFK Boulevard and Market Street, that will also correspond to the Woodland Walk running diagonally through the Drexel and Penn campuses.

The development of Schuylkill Yards is an important step in connecting University City to Center City and taking adavantage of the huge amount of commuter rail access in and around 30th Street Station.  These new towers start the next phase of Schuylkill Yards, which will eventually have several new skyscrapers surrounding 30th Street Station with the mix of office, residential, research, and retail space that will create a business district and related neighborhood that is similar to Center City, but with the high-tech and research focus that University City provides.  The design of these new towers is a bold choice for a landmark reimagination of the once underutilized blocks surrounding 30th Street Station. 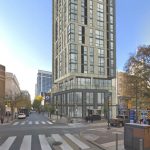 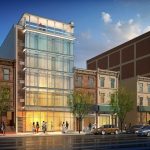