This new building will be five stories tall and have 29 rental units.  The units will be mostly one-bedroom apartments that are a little more than 600 square feet in size.  There will be a few two-bedroom units of about 825 square feet and a few three-bedroom units of between 1,000 and 1,200 square feet.  It will have a 1,500 square foot retail space, across Broad Street from the theatre. A bi-level apartment will be in the rear of the first floor and basement.  There will be a bicycle storage room. There will, also, be small courtyards on the sides of the building. The Broad Street facade of the building will have a distinctive glass curtain wall, with some brick trim recessed from that glass curtain wall.

North Broad Street will continue to develop.  As Temple University continues to grow and development happens near Center City, North Broad is becoming more popular and is starting to develop into a true downtown-style main street for North Philadelphia, and it is starting to stand out as more of a premier street and location for the entire city.  New market-rate apartment developments will keep being built along North Broad, and not just for Temple University students. Many of these new buildings will be upscale and will have distinctive new designs and features that were not typical of previous North Broad Street buildings. 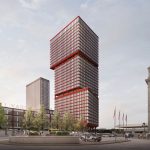 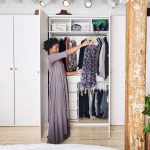