Spring Garden Street, in Northern Liberties, is seeing new development, especially renovation of existing buildings.  New construction hasn’t really been happening yet on Spring Garden, though, despite lots of new construction happening further up in the neighborhood for a long time now.  In between Spring Garden and Callowhill Streets is the Callowhill Industrial District, a large industrial park of mostly factories and warehouses in between large parking lots, that was developed in the 1960s and 1970s.  At that same time, a large parcel on the north side of Spring Garden Street between Fifth and Sixth Streets was redeveloped into an inward facing wholesale shopping center, with a small parking lot on Spring Garden. While the front retail spaces of that shopping center have been filled with some new stores, the rest of the shopping center has been vacant for many years.  Now, developer R Investment Twenty One (Rodin Group) has bought the shopping center and intends to replace it with a high-rise apartment building. This new apartment building is being designed by BLT Architects.

This new apartment building at 501 Spring Garden Street will be twelve stories tall, a little taller than most buildings on the surrounding blocks.  It will extend north to Green Street and halfway to Sixth Street, with a one-story section extending all the way to Sixth Street. The first floor will largely be used for 60,800 square feet of retail.  The building will have 382 rental units above the first floor. The apartments will be studios, one-bedroom units, and two-bedroom units. A plaza will be on Fifth Street, in front of the residential entrance and lobby.  There will be a second floor courtyard with private terraces and roof decks will be on top, with an amenity room in between and amazing views of the Center City skyline and the Delaware River and Ben Franklin Bridge. An underground parking garage will have 205 spaces and there will be five additional surface parking spaces.  The exterior will have stone, metal panels (including a yellow line of trim near the top), and large windows.

Northern Liberties has seen much new development over the years.  That development has included townhouses, small apartment and condo buildings, and now larger apartment and condo buildings.  The Callowhill Industrial District will likely see further development, including a new apartment building on Fifth Street, just south of Spring Garden Street and the former Mother’s Work factory, and proposed high-rises at Fourth and Callowhill Streets.  The shopping center at Fifth and Spring Garden Streets was little used and had become somewhat of a blight in the neighborhood, even with some renovation at front. A large new apartment building, with significant new retail spaces large enough to include a supermarket or similar grocery store, would have a big impact on Northern Liberties and would increase demand to develop in the Callowhill Industrial District to the south, helping to connect Northern Liberties to Old City to the south. 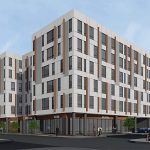