One of the most exciting new developments in Philadelphia is One Cathedral Square. Located at 1701 Race St in the neighborhood of Logan Square, this development is transforming a former church into a building that houses 271 residential units. The project has been spearheaded by its designer, Solomon Cordwell Buenz of EQT Exeter, and was officially opened on August 24th. The building was not fully completed in August, but tenants did not mind as they moved into the 23-story residency as the doors opened.

Opportunities for leasing at One Cathedral Square opened over the summer, with the rent price for a studio apartment starting at $1,700 per month. One Cathedral Square boasts studio apartments as well as options for one, two, and three bedroom units. The studios mostly have an “L-shaped” floorplan, which allows for privacy between the living area and the kitchen. All of the units range in size from between 501 – 1,627 square feet. The units with more bedrooms are larger, culminating in the 1,627 square feet three bedroom penthouses on the 21st and 22nd floor.

The amenities include a fitness center, co-working spaces, Amazon delivery lockers, and a rooftop kitchen and lounge. The rooftop kitchen and the lounge will be located on the 23rd top floor, giving residences a chance to enjoy the breathtaking views of Logan Square and the Cathedral Basilica of Saints Peter and Paul. The fitness center overlooks a different view–the Ben Franklin Bridge and Southeast Philadelphia. The amenity floor is expected to be fully completed by the end of the year. The co-working space, which includes a conference room, is already active for residents and is located near the lobby. It displays a view of a landscaped garden that sits between the building and the rear of the Cathedral.

The building is currently located where the rectory of the Cathedral used to be, and the developers have plans to expand the site around the church. EQT Exeter wants to create a landscaped garden path that will connect One Cathedral Square with the Sister Cities Park on 18th Street. The developers are also planning to develop a prayer garden, which will be a private area for the Cathedral’s priests. Gianni Parente, an investment officer at EQT Exeter, believes the development is just what the area needs and was quoted as saying, ““The Mormon Church did a great job with the north side of Vine Street, and this really felt like a critical piece to add more life to the lower Parkway.” 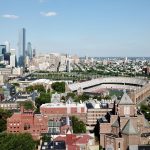 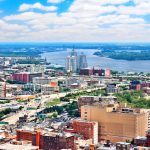